Interview: Piz Daint Supercomputer advances to the #3 position on the TOP500

In this video from PASC17 in Lugano, Michele De Lorenzi from CSCS discussed the recent advancement of Piz Daint supercomputer to the #3 position on the TOP500. After that, he describes the mission of the PASC conference and the…

In this special guest feature, Andrew Jones from NAG offers his perspective on ISC 2017. How he came to know such things is a mystery as Mr. Jones did not attend the show this year. One thing is for sure; from now on I'm going…

staff | June 27, 2017 at 03:01 AM From Computer Science Teacher - Thoughts and Information From Alfred Thompson

Coding is Not a Four Letter Word

I am at ISTE and have lost count of the times today someone said "you can program this without knowing how to code." Usually they mean this because they use a block based programming environment like Scratch or Blockly or Snap…

Have been reexamining note taking systems.  Had only briefly looked at OneNote before.    Nicely done.  The basic ideas should be fundamental, and easily connected to the many channels now online. Would also be useful to think…

The 2017 STOC is over, and I thought it went very well.  The new format ran with what seemed to me to be minimal to non-existent glitches, and overall it sounded like people enjoyed it.  The local arrangements were terrific -…

Models of China Ambitions and Directions

Wharton has published a special, multi segment piece on new China Strategy and Economics.  We did lots of work trying to understand the direction of China using advanced agent models.  Often touched upon in this blog.     This…

The Computing Community Consortium (CCC) has been working hard on various white papers over the past couple of months and slowly releasing them. You can see all of them here. Today, we highlight one paper in particular, called…

Or perhaps the nature of derived meta data about self imagery.

Selfies: We Love How We Look and We're Here to Show You

Researchers at the Georgia Institute of Technology say they have analyzed 2.5 million selfie posts on Instagram…

Separating the Paranoid from the Hacked

Sad story of someone whose computer became owned by a griefer: The trouble began last year when he noticed strange things happening: files went missing from his computer; his Facebook picture was changed; and texts from his daughter…

A Chat Bot for Company Knowledge

I got a note recently that I should try Obie as a chat bot based on corporate knowledge provided in Slack.  I have now used Slack for several projects,  fine as a chat space for team projects,  somewhat quirky,  hard to integrate…

A closer review of the Amazon Echo Show, essentially a full Amazon Echo with a screen added.    As skills are built for it,  should add a visual dimension to assistance.  Google Home has this already through 'casting', but I

Supercomputing the Secrets of the Snake Genome at TACC

Researchers at the University of Texas at Arlington are using TACC supercomputers to study the unique traits of snake evolution. Led by assistant professor of biology Todd Castoe, the team is exploring the genomes of snakes and…

How might we be able to use this to teach and learn from Bot communications?   As suggested below, this is probably not a formal language, as we understand it.  But any stream of data from any sensor is a language of sorts,  which…

Have not read yet, but starts at some of the right issues.

This paper defines the concept and process of…

Franz Dill | June 26, 2017 at 10:44 AM From Computer Science Teacher - Thoughts and Information From Alfred Thompson

If I am seeing a theme at ISTE 2017 so far it is making. Session after session demonstrates learning by making things. No where is this more true than with computer science. Micro:bit and AdaFruit Circuit Playground Express are…

Last week I attended STOC as its first new TheoryFest in Montreal. Pretty much everything about TheoryFest went extremely well and for the first time in a long time I felt STOC played a
… Lance Fortnow | June 26, 2017 at 09:24 AM From insideHPC Haohuan Fu from Tsinghua University in China at the PASC17 conference in Lugano. "This talk reports efforts on refactoring and optimizing the climate and weather forecasting programs – CAM and WRF – on Sunway TaihuLight. To map…

The FAA Is Arguing for Security by Obscurity

In a proposed rule by the FAA, it argues that software in an Embraer S.A. Model ERJ 190-300 airplane is secure because it's proprietary: In addition, the operating systems for current airplane systems are usually and historically…

The 8th Irish Supercomputer List was released last week, featuring two new Top500-class machines. The new entrants, from an undisclosed software company, feature at spots 196 and 197 on the 49th Top500 Supercomputer List, each…

Video: The Amazing Lustre through the Alps Tour

We interrupt our stream of serious HPC news for this post-ISC update from Europe. "After ISC wrapped up last week, I had the good fortune to join the First Annual Lustre Motorcycle Tour of the Alps. This amazing three day trip… The Proceedings from ISC 2017 are now available for download at no cost for a limited time. "We are pleased to announce that many fascinating topics in HPC are covered by the proceedings."

Evan Leybourn of IBM on the Theory of Agile Constraints ...
Business Agility in general   .....

He defines (full interview at the link):

I wrote about this in my article on, and with apologies to Eliyahu…

Today PEARC17 announced that 66 students will attend their conference coming up July 9-13 in New Orleans. PEARC17—Practice & Experience in Advanced Research Computing 2017—is for those engaged with the challenges of using and…

In the world of HPC, moving data is a sin. That may be changing. "Just a few weeks ago, AIC announced the successful completion of a landmark, 1-petabyte transfer of data in 34 hours, during a recent test by Zettar that relied…

Twitter Stream from ACM's 'Turing Award at 50' meeting this week.  Watched small part of it, inspirational and am glad to see it will be made available on going, details at the link.

A favorite and surprisingly useful topic.  Heard of this being developed.  'Any structure' is an interesting statement,  but will the folding itself be usefully practical?   Even so a remarkable result. 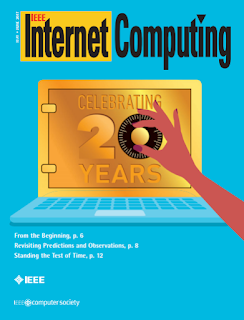 On its 20th anniversary, the editorial board created its first ever “The Test of Time” award. I'm honored to say they gave it to our 2003 article, "Amazon.com Recommendations… Greg Linden | June 24, 2017 at 07:00 PM From The Eponymous Pickle

Getting Direct to Consumer Right

From CustomerThink, detailed piece on how Gillette is doing direct to consumer, followiing un a number of moves to deliver quality razor blades with new pricing and replenishment models.
Gillette Shows How to Get It Right When…