From Schneier on Security

According to a lawsuit (main article behind paywall), "a Miami-based food vendor and its supplier have been misrepresenting their squid as octopus in an effort to boost profits."...

Details from the 2017 Workshop on Economics and Information Security

The 16th Workshop on Economics and Information Security was this week. Ross Anderson liveblogged the talks....

Assistants in the Hospital

One of the earliest suggestions for virtual assistants was to have them answer questions and perform simple non-medical tasks in hospitals and other health care facilities.  Huge amounts of professional time are expended this…

Canada is 150 years old today. The iPhone is 10 years old this year. We can safely say that the iPhone 7 is over a hundred times faster, in almost every way than the original iPhone. Very few things get 100 times better overContinue…

Is Water-Free Cooling the Real Future of HPC?

In this video from ISC 2017, Olivier de Laet from Calyos describes the company’s innovative cooling technology for high performance computing. "The HPC industry is ever facing is facing the challenge of ever-increasing cooling…

Podcast: Why HPC is Vital at NASA

Single-player RPG games are having a tough time. Last year I reviewed Deus Ex: Mankind Divided. Though I felt it was an excellent game, it was not a commercial success and it seems that there will not be a follow-up game in the…

In this video from ISC 2017, Tom Krueger from Intel and John Wagner from Fujitsu describe the new KNL Remote Access Program. Now, with the power of Intel HPC Orchestrator, Fujitsu customers can gain access to a small cluster …

ISC 2017 Wrapup by the Numbers

In this video from ISC 2017, Bill Bryce from Univa describes how the company's software powers simulation for everything from Formula 1 racing to manufacturing and life sciences. "Univa is the leading innovator in workload management…

The Wave of a New AI

Nice, non-technical overview in CACM look at emerging technologies that are supporting advances in AI.  Useful with management to consider areas of interest.   Will this push us over the hype edge for real intelligent value?

Franz Dill | June 30, 2017 at 09:29 AM From Computer Science Teacher - Thoughts and Information From Alfred Thompson

This is sort of a riff from yesterday’s post about what to teach students who are beyond the normal Advanced Placement CS level or perhaps looking to something advanced in place of the AP course. Most professional development…

*After launch, Bixby's language support will initially begin with Korean, and expand to English and then Chinese. Plans for further language support are tentative. Bixby voice controls will soon be integrated

Reminded of the use of the term:

IKEA's Idea Man Reveals How to Discover Your Own Million Dollar Idea
The process is called vu jàdé. That's déjà vu backwards, and anyone can do it.    By Chad Perry in Inc.

Fortune magazine just published a good article about Google's Project Zero, which finds and publishes exploits in other companies' software products. I have mixed feeling about it. The project does great work, and the Internet…

A Beginners Guide and Tutorial for GANs

Via O'Reilly, supported by Google. A Simplified Tutorial.  Instructive, not the idea of a network generating content.

Its good to remember that statistics is the basis of all useful problem solving:

The field of statistics is about…

Still a very limited set of examples.  The idea of branching interactive storytelling has been tried for a long time without success.     I like trying it again, but don't have great expectations.

Research Opportunities and Visions for Smart and Pervasive Health

The Computing Community Consortium (CCC) has released a white paper, Research Opportunities and Visions for Smart and Pervasive Health. This paper is an outgrowth of the December 2016 workshop Discovery and Innovation in Smart…

The Women of Bletchley Park

Good instructive example for Cortana.  How easy is this for maintaining the recommendations?   I like to show these kinds of examples because they include simple business process.  Which is forgotten these days when mentioning…

Interesting that the 'Show' version of Alexa, with a screen,  is attracting advertisers.  Consider that this can add intelligence for consumer with the delivery of adds.   Images are likely expected.  Video in particular.   Here…

Today the InfiniBand Trade Association (IBTA) announced that InfiniBand remains the most used HPC interconnect on the TOP500. Additionally, the majority of newly listed TOP500 supercomputers are accelerated by InfiniBand technology…

Will do anything to get math interest from kids.

I have been asked if math and computing interest are really interchangeable?   Having been a professional in both spaces,  and I say, yes, and especially now more than ever.   Just…

50 Years of the Turing Award 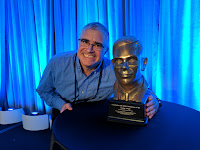 The ACM knows how to throw a party, a two-day celebration of the 50th anniversary of the Turing Award. Every recipient got a deck of Turing Award playing cards and the ACM unveiled a new bust of Turing perfect for selfies.… Lance Fortnow | June 29, 2017 at 10:09 AM From The Eponymous Pickle

A good explanation of generative neural networks,  how they work and their applications.  There has been some conversation about their implications for video use and marketing.  Any real examples out there?   Exploring. staff | June 29, 2017 at 10:00 AM From Computer Science Teacher - Thoughts and Information From Alfred Thompson

This question is now more complicated since we have two AP CS exams again. Does CS A follow CS P? Should it be one or the other but not both? But let’s put that aside for the moment. Suppose a student takes one of the AP CS courses…

Websites are sending information prematurely: ...we discovered NaviStone's code on sites run by Acurian, Quicken Loans, a continuing education center, a clothing store for plus-sized women, and a host of other retailers. Using…