Home/Magazine Archive/February 2022 (Vol. 65, No. 2)/Is Your Autonomous Vehicle as Smart as You Expected.../Full Text
Viewpoint

Is Your Autonomous Vehicle as Smart as You Expected?

If your vehicle were self-driving on the road, will it crash into a truck towing a trailer as Tesla did in March 2019?a Despite the fatal accidents involving autonomous vehicles, such vehicles represent an unstoppable trend that will reshape the world. In this Viewpoint, we highlight why current autonomous vehicles would not be preferred by their users. Furthermore, we present a concise framework for profiling the characteristics of various autonomous vehicles based on intelligence quotient (IQ), ethical quotient (EQ), and adversity quotient (AQ).

As presented in Figure 1, there are already major players focused on the automated driving market. In the next several years, millions of self-driving cars are going to hit the road, prompting tremendous business opportunities for what is referred to as "Mobility-as-a-Service" (MaaS).b However, public concerns regarding autonomous vehicles' "smartness" are escalating. For example, although some major players, such as BMW and Ford, have announced an upcoming rollout of their best models, does this mean that their autonomous vehicles have fixed all of their "smartness" problems? In other words, will autonomous vehicles be able to understand and deal with any object on the road and adapt to most environmental constraints when they are available for purchase? Will the vehicles be capable of "sacrificing themselves" for the greater good? As such, the level of autonomous vehicles' smartness remains a big question that has yet to be fully realized, especially considering the fact that almost each autonomous vehicle model has very different characteristics. 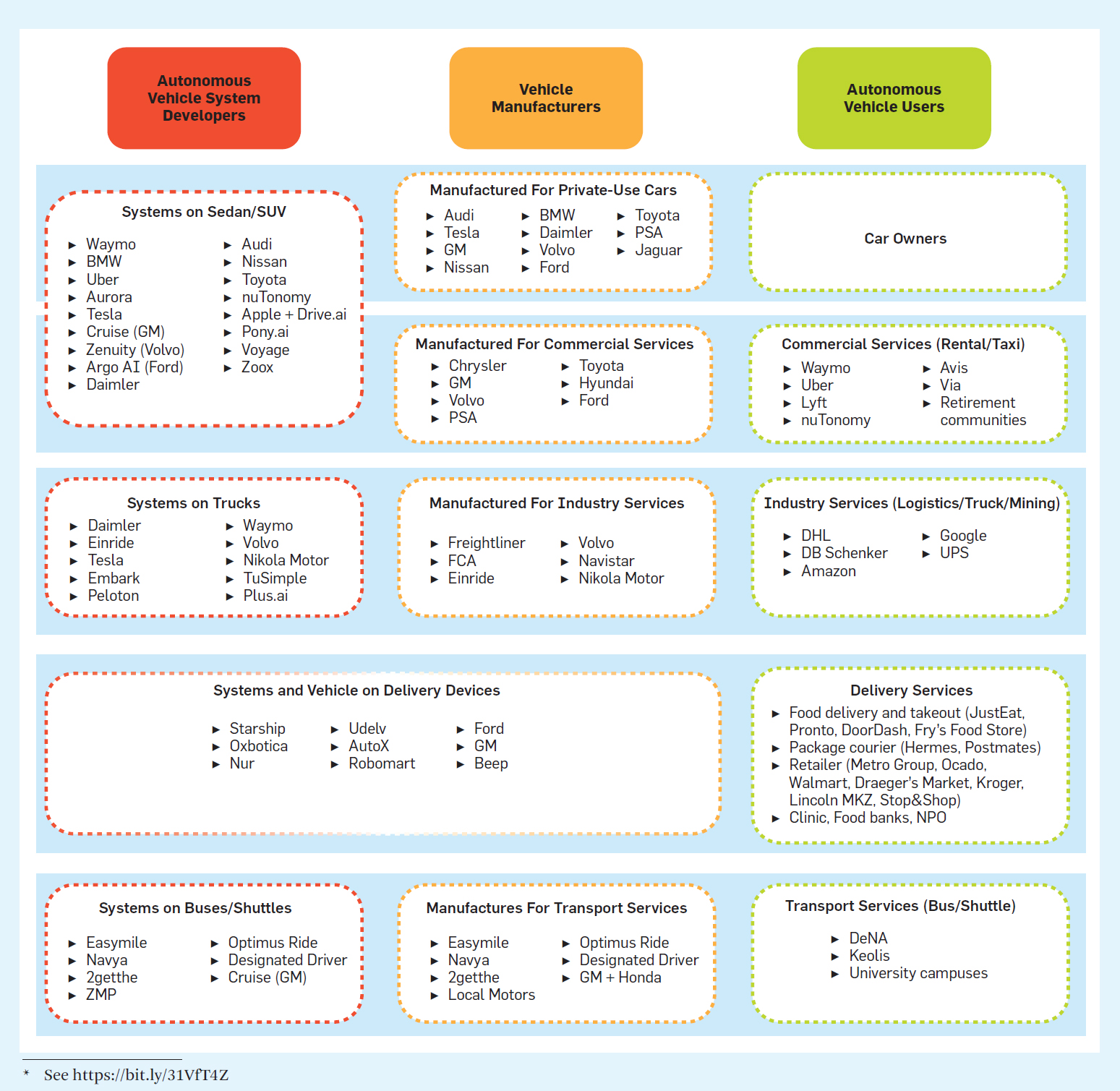 Simply speaking, autonomous vehicles are cars that employ sensor, computer, machine learning, or artificial intelligence (AI)-based systems to support automated driving decisions in regards to steering, changes in speeds, and monitoring the environment.2 It is thus no surprise that almost all of the main players in automated driving are working hard to showcase their best equipment specifications (see the accompanying table). For example, Waymo's Level 4 autonomous vehicles are not equipped with radar, while Tesla's Level 4 autonomous vehicles are equipped with radar. Moreover, it is worth noting that both autonomous vehicles will also have different types of CPU, GPU, and SoCs (system-on-a-chip) as their different computing solutions. However, it remains challenging to gain a clear picture of autonomous vehicles' "smartness" by simply comparing their equipment specifications. After all, the quantity or specification of these items are not equivalent to any meaningful rankings. According to the Society of Automotive Engineers (SAE),c autonomous vehicles at Level 5—the highest—should be capable of handling all roadway and environmental conditions managed by human drivers regardless of geographic location, roadway type, weather, speed, day and night conditions, and so forth. This means that autonomous vehicles' smartness relies upon their driving decisions as compared to human decisions. 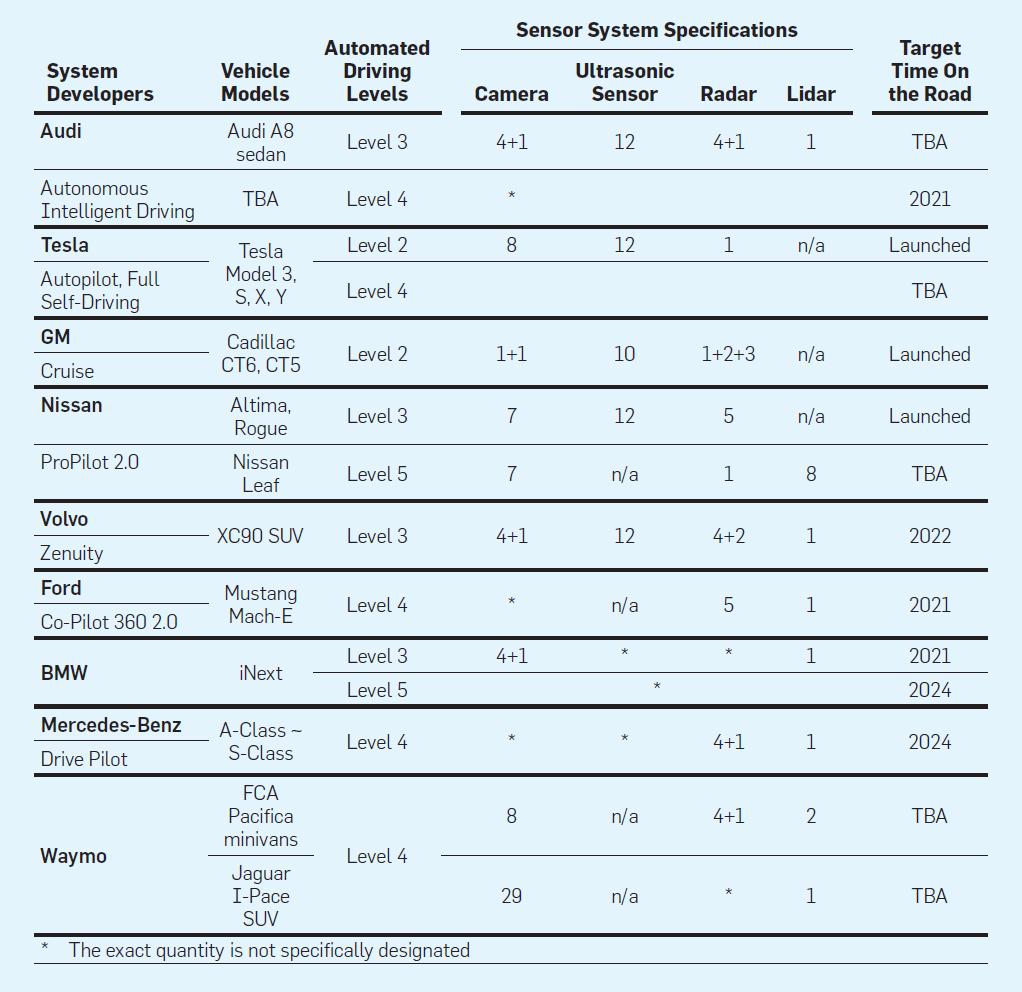 We thus suggest that one smarter way to ascertain autonomous vehicles' smartness is to assess IQ, EQ, and AQ. In our definition, the smartness refers to the capability of an autonomous vehicle for satisfying its users' technical, social and environmental expectations in driving. First, an autonomous vehicle's IQ reflects the dimension for assessing how it could "see and understand" as much as possible in making driving decisions. An autonomous vehicle's IQ involves multiple subdimensions, such as detection, identification, risk analysis, and reaction and execution that together form a set of process-oriented indices for consideration. Inarguably, the IQ is directly associated with the type or quantity of sensor, processor, and so forth, however, the key point is the integration of such IT components for generating a useful perception of reality and enabling a safe driving experience. For example, the finding of Tesla's fatal crash in May 2016 indicates that, although the car detected a laterally crossing white truck in its path, it identified the truck as bright sky. Moreover, despite the fact that some autonomous vehicles can detect and identify road signs, pedestrians, and even bicycle riders' hand gestures,d they can barely "understand" the risk of bumping into a nearby kangaroo. This is because when a kangaroo hops in the air, it may be perceived as farther away by some autonomous vehicles. In considering another Tesla's fatal accident in March 2018,e it was widely reported that no action was taken to stop the car before it crashed into a traffic barrier. More recently, in 2020,f the U.S. National Transportation Safety Board (NTSB) published its final report regarding Tesla's fatal crash in March 2019. According to NTSB, "Contributing to the crash was the operational design of Tesla's partial automation system, which permitted disengagement by the driver … " These examples signify the importance of assessing an autonomous vehicle's capability of detecting/identifying danger, analyzing risk, and mitigating it.

Second, an autonomous vehicle's EQ represents a dimension for accessing how an autonomous vehicle could "value what matters," as compared to a human driver with respect to making ethical decisions. These decisions may involve pedestrians' or other vehicle occupants' lives and deaths. The main difference between IQ and EQ is that, unlike EQ, IQ does not deal with ethical issues. For example, the trolley problem is a driving situation that any autonomous vehicle would face. There are two equally feasible solutions to this problem: sacrificing a passenger for saving pedestrians or sacrificing pedestrians for saving a passenger. Essentially, choosing either solution one or two requires an ethical decision and, therefore, falls within the domain of EQ. By contrast, although IQ may determine the optimality of road object detection, identification, risk analysis, and the related technical issues, its scope does not involve considering the importance of pedestrians' lives.

Generally, when any new mechanical and technological device is developed, ethical concerns always exist about its impact on social-ecological sustainability, and people have different concerns and interpretations about such an impact. For example, it is very common that, because of different concerns regarding fuel consumption or ecological protection, some human drivers in identical conditions would make different driving decisions even when it may not be necessary, such as maintaining a lower or higher driving speed or parking closer or further from a destination. According to an important study,h several critical issues for autonomous vehicles in the sustainable mobility ecosystem center around the trade-offs between driving efficiency and ecological impact—for example, energy usage and greenhouse gas emissions. This suggests smarter autonomous vehicles cannot be exempt from social responsibility, which includes the principles regarding trading driving efficiency for ecological impact and vice versa.

The IQ, EQ, and AQ as a whole (summarized in Figure 2) are a useful framework that covers the technical, social, and environmental perspectives for defining and clarifying the meaning of autonomous vehicle smartness. Using the terms of IQ, EQ, and AQ is mainly to facilitate communication. Without any detailed explanation, many people understand these terminologies conceptually denote multiple important capability dimensions and any of them should not be ignored. However, we do not intend to relate these terminologies to the issues such as anthropomorphizing artificial intelligence or machines learning. 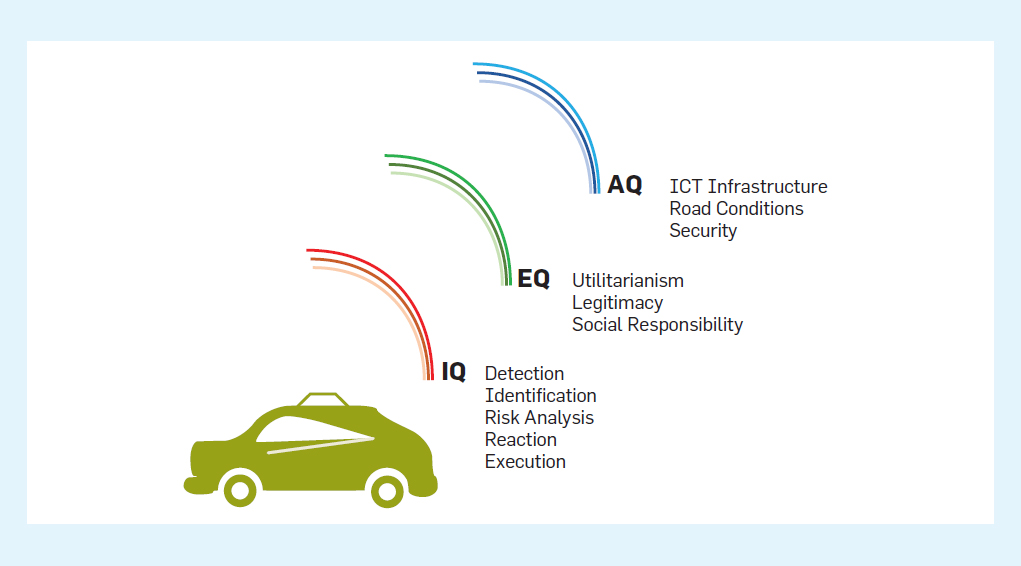 Moreover, the three dimensions of IQ, EQ, and AQ in our proposed framework cannot replace each other. The smarter autonomous vehicles should not concentrate on one while ignoring the others. For example, it is very unlikely that any autonomous vehicle can possess greater EQ or AQ without any IQ improvement in a practical manner. Relatedly, the framework could be easily applied in any context for profiling autonomous vehicles, but we do not mean to label any specific brands or types of autonomous vehicles as inferior or superior to others.

Shari S. Shang (sshang@nccu.edu.tw) is a professor in the Department of Management Information Systems at National Chengchi University in Taipei, Taiwan.

Junyi Wu (99356506@nccu.edu.tw) holds a Ph.D. from the Department of Management Information Systems at National Chengchi University in Taipei, Taiwan.

Copyright held by authors.
Request permission to (re)publish from the owner/author

Individual AI, a New Technology that Will Change Our World?