Over the past five years, rapid progress in photovoltaic technology has been further accelerated by materials called perovskites. They require only common ingredients and relatively easy manufacturing methods, holding out the possibility of cheap thin-film cells on a variety of surfaces or combined with silicon in large panels. In the laboratory, small-area cells made with these materials already feature solar-conversion efficiencies as high as 22%, rivaling those of traditional silicon solar cells.

"I've been in the business since the late 70s," said David Cahen, a chemist and materials scientist at the Weizmann Institute in Rehovot, Israel. "This is a time of developments in solar cells and photovoltaics that is unprecedented," including new materials, efficiency improvements, and cost reductions. But "there has not been anything like this one," he said. "The perovskites have put all of those into shadow."

A practical technology will require further engineering for large-scale manufacture and long-term stability, and there are still open scientific questions. Moreover, although researchers think they can avoid environmental toxicity from lead in the materials, they may not be able to avoid a public perception of danger. 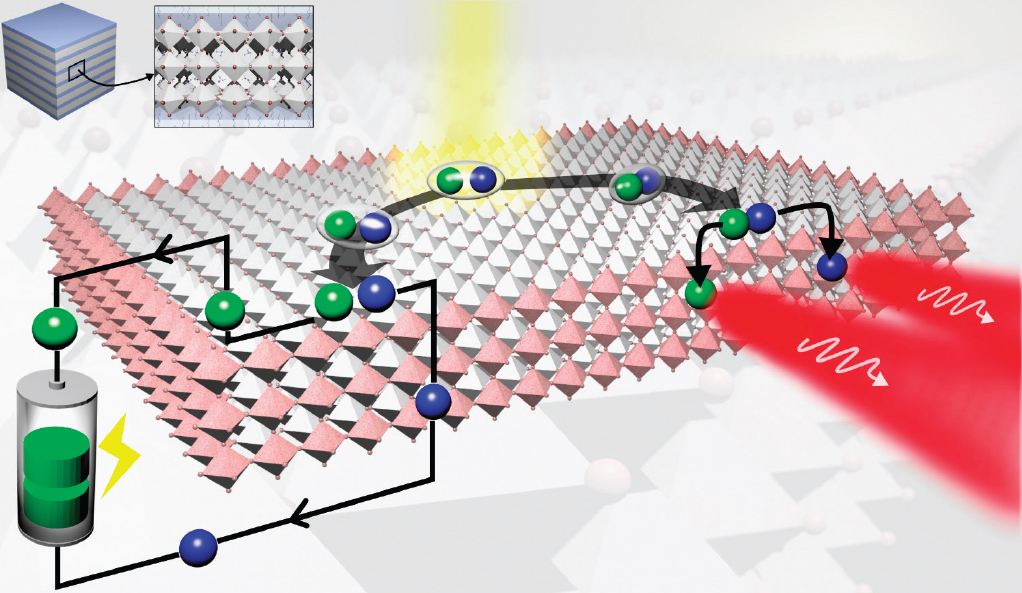 But perovskites' potential is clearly shaking up the field.

Perovskites are a well-known family of materials whose crystals consist of a lattice of octahedra, each comprising six negative ions around a positive ion, with a second positive ion in the gap between the octahedra. The octahedra can easily rotate while maintaining contact at their corners, giving perovskites unusual properties that have long been exploited in specialized applications. Lithium niobate, for example, acts both as a piezoelectric transducer between electrical and mechanical signals and in high-speed optical modulators for telecommunications. In the new materials, the arrangement follows these rules, but the ingredients are different.

The first hints of the solar-cell potential of perovskite semiconductors came from Japan in 2009, but researchers really took notice in 2012 with the report of cells having an efficiency of about 8%. In these hybrid organic-inorganic lead-halide perovskites, the second positive ion is generally a large organic (carbon-containing) molecule, while the octahedra consist of lead (sometimes tin) surrounded by halogen ions (from Group VII of the periodic table, commonly iodine).

"There are reasons why they escaped people's attention," said Michael McGehee, a professor of Materials Science and Engineering at Stanford University in Palo Alto, CA. "They have an inorganic aspect to them and then they have an organic ion in there as well." The current work-horse solar-cell material is silicon, carved from large single-crystal wafers, although other inorganic materials are also employed. Organic semiconductors, similar to those in some LED displays, also make good solar cells, and can be deposited near room temperatures. But the hybrid perovskites are "very different" than either of these, McGehee said.

Importantly, hybrid perovskites encompass a whole class of materials, depending on which components are combined in the crystal framework. By combining different metal, halogen, and organic components, researchers can tune the material's optical and electronic properties, as well as the chemical interactions that form the complete device. "There are many thousands of materials," McGehee said, and, accounting for electrode and interface materials needed for a complete device, "millions of combinations."

Extraction of electrical energy from sunlight requires complex, highly engineered structures. Various layers are combined to first direct sunlight into the semiconductor layer and then to pass the generated electricity to the outside world, and to prevent water or air from reacting with the materials. But the central role involves a semiconductor property known as its bandgap, which is the energy range separating low-energy states that are initially filled with electrons from higher-energy empty states. A photon, or quantum of light, that has more energy than the bandgap can liberate a negatively charged electron into the empty "band," leaving behind a positively charged "hole."

If the electron and hole make their way to opposite electrodes connected to the material, they provide that energy to the outside world as an electric current. The voltage at which this current is supplied is limited by the bandgap (measured in electron-volts). If the photon has more energy than this, the excess is lost as heat, while photons with too little energy to span the bandgap simply pass through without being absorbed. Because sunlight includes photons with a wide range of energies, the electrical power output of a single cell cannot exceed about 33% of the light energy.

However, the actual efficiency is always lower than this theoretical limit. One reason is that an electron can refill an empty state, locally "recombining" with a hole, rather than traversing the external circuit. This process occurs much faster when there are electronic states in the bandgap, an energy range that would ideally be empty. A key feature of the hybrid-perovskite materials is that they seem to have few electrically active defects. The resulting long lifetime before recombination, together with speedy motion of electrons and holes, makes it easier to approach the ideal efficiency.

Cahen suspects that defects are rare in perovskites because of their soft, floppy crystal structure, which he regards as "dynamically disordered," and possibly even "self-healing." McGehee, by contrast, said that "the material is full of defects," but that the defects are not a problem because of the chemical structure of the material. In many semi-conductors, he noted, one can regard the bandgap as reflecting the energy separation of "bonding" and "anti-bonding" combinations of states on neighboring atoms, so broken bonds at a defect create states with energy in the middle of the bandgap, where they are most troublesome. In the perovskites, by contrast, McGehee says the gap has a different origin, and defect states do not promote recombination.

Whatever the theoretical explanation, experimenters have already pushed the efficiency of a single perovskite cell above 22%, compared to almost 27% achieved for the best crystalline silicon cells after decades of work.

Beyond their high efficiency, hybrid perovskites have other useful features: their ingredients are abundant, and thin films can be formed near room temperature by either liquid- or vapor-based processing. These properties should make them inexpensive to create compared to silicon crystals grown at very high temperatures. Still, Henry Snaith, a physicist at the University of Oxford, cautions that quality and uniformity are at least as important as equipment cost for large-scale production.

Low-temperature processing also allows deposition of thin-film photo-voltaics on surfaces that could not tolerate high heat. For example, emerging applications known as building-integrated photovoltaics (BIPV) encompass solar cells deposited directly on roof shingles or on the window glass of an office tower, where they generate power while letting some light through.

These applications inspired Snaith to start a company called Oxford Photovoltaics in 2010 to develop dye-sensitized organic photovoltaics, which use one molecule to absorb the light and others to carry the electrical current (and which can also be deposited at low temperatures). Yet after promising results from his own university group and others, the company "rapidly shifted all activity towards perovskites." The company also shifted from the "tiny" BIPV market to mainstream solar panel applications, Snaith said. "We recognized very early on that perovskites could augment silicon in a tandem device," taking advantage of the low-temperature processing to fabricate a perovskite cell on top of an existing crystalline-silicon cell.

Tandem cells can extract more energy from the solar spectrum, potentially beating the efficiency limit for any single cell. By using a material with a larger bandgap, the perovskite cell makes better use of the high-energy part of the solar spectrum, while lower-energy photons continue into the silicon cell to generate a voltage more closely matched to their energy. Published perovskite/silicon tandem-cell efficiencies are as high as 23.6% (about 26% when the cells are wired separately). An alternative approach, combining two perovskite materials with different bandgaps, has demonstrated efficiency of 20.3% in the separately wired configuration.

In spite of the rapid research progress in small perovskite-based solar cells, much more work will be needed for a commercial technology. Practical modules require large, uniform, high-quality films, for example, as well as ancillary circuits to keep individual cells from hampering the entire array. Toward this end, Snaith said, Oxford Photovoltaics has acquired a facility in Brandenburg, Germany, and is aiming toward the end of 2018 for pilot production on six-inch-diameter silicon wafers. Other companies may not be far behind.

Because the perovskites can react chemically with water or air, commercial cells will probably need multiple levels of protection or encapsulation. Customers will expect extra assurance that panels using these new materials will be stable over multiple years of use.

Researchers are also still exploring which ingredients make the best semi-conductor (not to mention the various interface, electrode, and encapsulation materials). "If I had to make a prediction, I would say the material has not been found," McGehee said. Snaith noted his company has settled on a particular composition for its initial manufacturing, but he expects that will change over the years.

One component that has proven difficult to change is lead, which has a well-deserved nasty reputation because of insidious health impacts from past use in gasoline and paint. "We haven't been able to do anything that remotely approximates these materials without lead," Cahen said. (Researchers have had some success by replacing lead with tin, but these materials have had stability issues so far.)

Researchers are still exploring which ingredients make the best semiconductors (not to mention the various interface, electrode, and encapsulation materials).

Because the perovskite layer need only be less than a micron thick, however, compared to hundreds of microns of silicon, the overall fraction of lewad in a module is quite small. In addition, any encapsulation required for stability should keep the lead in place. "Although it's something we're very sensitive to," Snaith said, "I think there's very little chance of any real environmental risk, provided panels are sensibly deployed and recycled at the end of their lifetime." He acknowledged, however that public perception could still be an issue.

"It does mean I don't think you'll see this in portable products," McGehee said. For panels, he speculated, 30% efficiency of cost-effective tandem designs is "very do-able," he speculated, whereas silicon panels max out at 22%23%.

Don Monroe is a science and technology writer based in Boston, MA.

The Digital Library is published by the Association for Computing Machinery. Copyright © 2017 ACM, Inc.

Validity and Reliability in Data Science: An Interdisciplinary Perspective